If you’re considering an Instant Pot and wondering if it’s worth it to buy one, then let me give you the quick answer.

HELL YEA! The Instant Pot is worth every dollar, in my humble opinion. (And it doesn’t even cost that many dollars compared to what a beast it is in the kitchen.)

I’m convinced the Instant Pot is the greatest kitchen appliance invention since the microwave. It’s personally a tool that I use almost daily. In fact, some days I use it multiple times.

I’m one of those people who have considered getting two just because I want to have multiple things going in it at once. (You can actually do that with a technique called pot-in-pot cooking, but I haven’t mastered that quite yet.)

In case you’re not quite convinced, let me give you 9 reasons why an Instant Pot is worth it.

I know when people think of pressure cookers, they think of the old-school kind that goes on your stove top and can explode when opening. The Instant Pot isn’t like that. (Although, I think there are newer, updated versions of those old-school ones too. Let’s not completely diss those.)

The Instant Pot is electric and when it comes to pressure, the lid locks so that you are unable to open it at a time when it’s not safe. Not even Popeye could get in that thing!

The bigger issue with the Instant Pot isn’t an exploding meal, it’s mold. One time I accidentally closed up my pot before completely cleaning and drying it out. And then I forgot about it.

Oops! Big mistake! When I opened it up, it looked like a 9th grade science experiment. So make sure to thoroughly clean and dry it.

Once in a while you may need to replace parts to ensure your Instant Pot is completely safe and functioning. I’ve had mine for several years now, and the only thing I’ve replaced is the rubber ring that goes on the inside of the lid. And I only did it because it got smelly.

#2 – You Can Make Healthy Meals in the Instant Pot

One of the things I love about the Instant Pot is how easy it is to make healthy, plant-based meals in it. In my next post, I want to gather up a bunch of awesome recipes for the Instant Pot from Pinterest like I did with these sandwiches.

Here’s one to whet your appetite for now:

The Instant Pot cooks in a way that allows the biggest and boldest of flavors to come together in a quick and efficient way. That means healthy meals are flavor-packed just like their unhealthier counterparts. I find this to be especially true with soups, stews, and chilis.

#3. The Instant Pot is Also a Slow Cooker

If you love using a slow cooker, but you also want to have the ability to cooks meals quicker, then an Instant Pot is perfect for you. There is a slow cooker function on the instant pot, so that means you can have one less appliance in your house.

Just like a standard slow cooker, you can choose to have the Instant Pot cook at a little higher temperature in 4 hours, or a little lower temperature for 8 hours. The only thing you’ll need to make this work is a glass lid that sits on top of your pot. Amazon has them available specifically for the Instant Pot, but I personally just use what I have in my kitchen. There’s a good chance you already have a lid available that fits.

#4. The Instant Pot is Better Than a Crockpot

I actually think the Instant Pot is better than a crockpot. Yea, I said it. Come at me.

It’s not that I have anything against crock pots, it’s just that the Instant Pot already does it, so why have more than one appliance when one can do both?

#5. The Instant Pot is an Amazing Rice Cooker

The absolute best thing I make in my Instant Pot is rice. So, guess what? That’s another appliance you don’t need. You don’t need a rice cooker because the Instant Pot already does it.

And I’m telling you what. It makes some damn good rice.

It may take you a time or two to get it just perfect for your taste, but once you do, you’ll be set for life.

#6. The Instant Pot is Easy to Use

I know people who get an Instant Pot and then they just leave it sitting in the box. They’re intimidated by all the buttons. But really, it’s so easy to use!

Of course, you have some complicated recipes out there where you have to saute things, then pressure cook, then natural release for a bit, then manual release, then add more ingredients, pressure cook…

Well, you get the picture.

For the most part, you add your ingredients (some do need to be sauteed first, but that’s easy enough), dump your ingredients in and then set your timer for how long you want your stuff to cook. You can walk away and do other stuff while your Instant Pot does the hard work.

#7. The Instant Pot is Easy to Clean

OK. I have heard people complaining that the Instant Pot is hard to clean. To that, I say, “whhaaaaa?”

You have a single pot.

One pot that all the food goes in.

You take it out, you clean it up, you put it back. I don’t know how that’s hard. When I’m feeling really lazy, I just stick that pot in the dishwasher.

The outside of your Instant Pot can get a little messy. Maybe that’s what they’re referring to? That’s easy enough to wipe down though.

Sometimes things stick a bit in the pot. But you just soak it in some soapy water. Everything comes right off. You can even burn things (oops, I’ve done it), and it’ll come off with a little soaking and a bit of scrubbing.

I promise it’s easy to clean!

The Instant Pot is very, very quiet. There’s just a gentle hissing when it’s coming to pressure. It makes no noise while it’s cooking. It beeps when it’s done. But it’s not even an annoying beep like the microwave I just got.

When you manually release the pressure, it’ll hiss like crazy.

My cats absolutely hate it!

I saw some people say that the Instant Pot isn’t faster than cooking on the stove. They’re kind of right about that. You do have to wait for:

If your pot is full, you can be waiting for a while for the pot to come to pressure. And if you’re doing a natural release, this also can take some time.

However, not all recipes will take a long time to come to pressure and to release. Also, I think the benefit of the Instant Pot isn’t that it takes a shorter amount of time to cook food, but that:

With all of that said, let me tell you about some foods I would NOT cook in the Instant Pot.

Food I Would NOT Cook in the Instant Pot

I see some people online who like to throw absolutely everything into the Instant Pot, and I do not agree with that. There are a couple of foods that are easier to cook on the stove and some that just don’t do that well in a pressure cooker.

As mentioned above, I don’t want complicated recipes. I’m not all about that.

I want to dump everything in, set it and forget it.

Here are a couple of foods that I think are either too tricky to cook in the Instant Pot, or not worth cooking in there:

Now let me tell you about my favorite foods to cook in the Instant Pot.

These are some foods that the Instant Pot does extremely well with.

These are just a few of my favorite things to make in the instant pot, but of course, there are tons of amazing foods and meals you can make in it. That’s why it’s 100% worth it to have one in your kitchen! Mine never leaves the countertop.

I hope this shows you why the Instant Pot is so great and why I think it’s worth it to buy one. I tell everyone I know about the Instant Pot because it makes cooking so easy it’s almost like cheating.

(What do you think? Is it really cooking when you put all your ingredients into an appliance and then push a button?)

Whether it’s cheating or not, I don’t care. I don’t know about you, but I’m a busy mom, so I need to get meals on the table that are fast, easy and healthy. I love that I can put stuff in there, get it going and then go fold laundry. It makes multitasking a breeze!

If you’re interested in the Instant Pot, there are actually a lot of different options these days. My only recommendation is to pick a bigger quart-size over a smaller one. I bought my Instant Pot from Amazon, and you can see that one here. The price is great and I’ve been happy with this purchase for several years now. But to be honest, you can’t go wrong with any of the options. 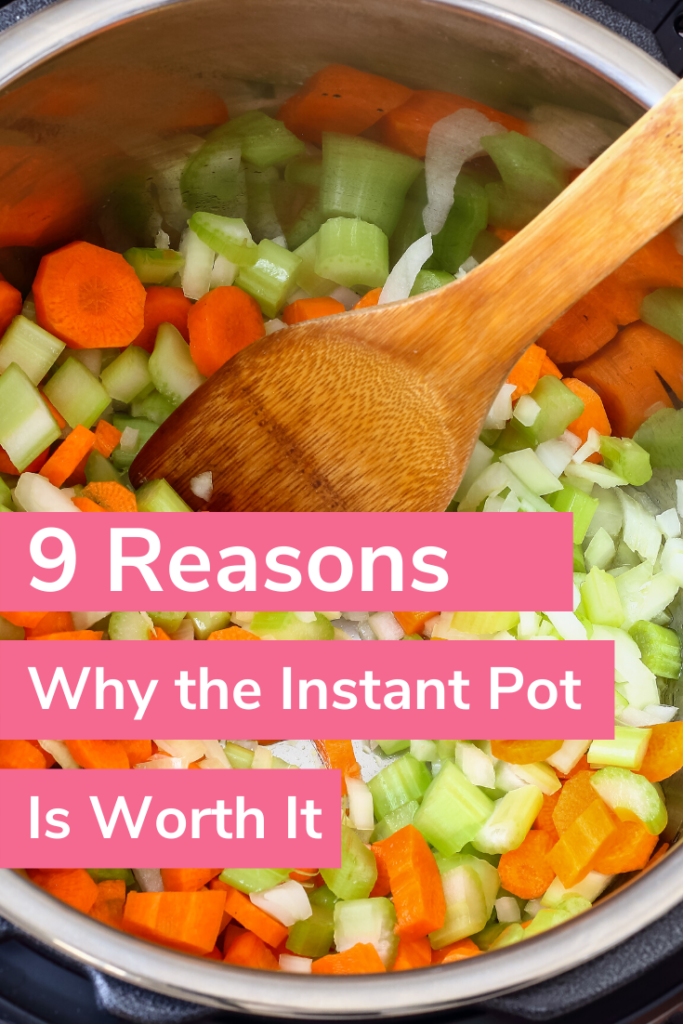